One of Houdini's more aggressive tactics in his crusade against fraudulent spirt mediums was to publish their names and addresses in the local papers and publicly challenge them to attend his show and demonstrate their abilities. The below is one of those ads from February 22, 1926 when Houdini was making a two-day appearance at the Orpheum Theater in Reading, Pennsylvania.


Below are the mediums Houdini called out. I've added a Google Map links to their address, some of which look like they could be the same buildings from 1926. Do their spirits remain?
Rev. Sada Louise Hand.....231 Clymer Street
Miss Sarah Hendricks.......1743 Perkiomen Ave.
Mr. Richards.....540 S. 12th Street
Walter Gross.....526 S. 9th Street
Rev. S.M. Ellwanger.....117 N. 5th Street
The only person to appear at the theater was Rev. S.M. Ellwanger. But she came to explain she was not a medium as the ad claimed. Houdini admitted from the stage that his operative had made a mistake. (You can read a full account of that HERE.)
Interestingly, Houdini had warned that he would be sending his "secret service" into Reading to suss out mediums. This is from the Reading Times, Feb. 16, 1926.

Houdini's two-day appearance in Reading was untypical short engagement for his full evening 3 Shows in One. He would finish out the remainder of the week in York, PA, where, as far as I know, he did not issue a hit list.
Below is the Orpheum Theater in Reading as it appeared in Houdini's time. 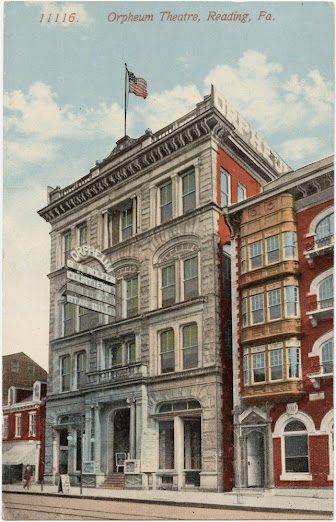 Email ThisBlogThis!Share to TwitterShare to FacebookShare to Pinterest
Tags: [History], 1926, 3 Shows in One, Challenges, Spiritualism, Theaters