The Chaplin-Keaton-Lloyd (and Houdini) Alley video

Exciting news for silent movie buffs and fan of Hollywood history. The famous alley off Cahuenga Blvd in Hollywood has now been officially named the Chaplin-Keaton-Lloyd Alley. The below video, made for last month's Silent Movie Day gives a rundown of all the famous silent films shot in the alley, including Houdini's The Grim Game!
The recognition and naming of the Chaplin-Keaton-Lloyd Alley was thanks to the efforts of silent movie historian John Bengtson and Hollywood Heritage. (John is also the guy who identified the alley in The Grim Game.) You can watch a video of the September 29, 2021 dedication ceremony HERE. 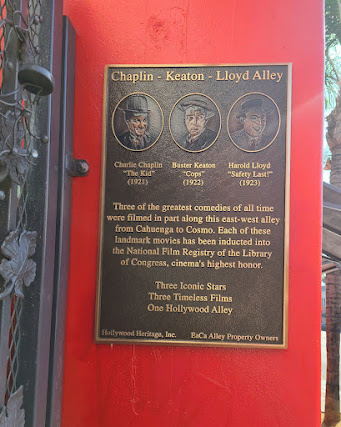