This footage is identified as Houdini doing a suspended straitjacket escape in Providence, Rhode Island, in September 1924. Houdini did indeed play Providence the week of September 15-21, 1924, so evidence of this escape shouldn't be hard to find. However, I've not been able to find any newspaper account or other mention that confirms the date and location of this escape. But it's still a fantastic piece of film.
Any research sleuths out there want to take up the challenge of verifying this escape? As I said, Houdini played Providence the week of September 15, 1924. But another candidate would be the week of November 23, 1925. (Houdini did a suspended straitjacket in Providence on March 7, 1917, but this is clearly Houdini in the 1920s so we can discount that one.)
Or this could be misidentified and a different city entirely?
He always keeps us guessing!
This clip is from a compilation of Houdini footage from the George Eastman House on the "Houdini The Movie Star" DVD set.
UPDATE: Thanks to reader Dave and the always resourceful Bill Mullins, we can now confirm this footage was shot in Providence. Bill and Dave cleverly used the names of businesses glimpsed in the background (Liggett Druggist and Dart & Bigelow) to establish that Houdini is doing the escape on Westminster Street in front of the offices of the Providence Tribune (the building seen flying the American flag below). Bill has also provided a map from the time. 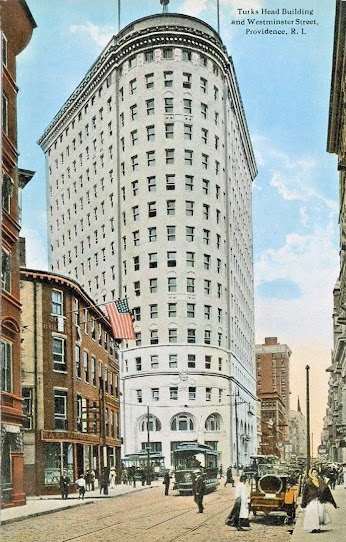 Today a modern office building stands on the sight at 40 Westminster Street.
So all that remains for us to discover now is the date!
Related:
Written by John Cox at 8:16 AM