Ok, here's today's obsession. The below image is an enlarged detail from a terrific unpublished photo in the Kevin Connolly Collection. This banner at laid across a large Houdini poster. I'm pretty certain this is advertising a spiritualism lecture on March 15, 1924. But the question is where?
It appears the answer may be in the two words above the word "AUDITORIUM." Can anyone make this out? I think the second word might be "Beach"? Know that Houdini was in Atlanta on March 13 and he's in Florida on March 17. So this would fall somewhere between those geographically (and could very well be Florida).
There is one other clue. This same photo also shows a poster for opera singer Amelita Galli-Curci appearing at this same "Auditorium" on March 19, 1924. So if we can't find Houdini on the 15th, maybe we can find Galli-Curci in the 19th? I've actually been able to locate her in Charleston on March 21. So, again, we clearly seem to be somewhere in this region.
Let's find Harry!
UPDATE: There's a fast consensus forming around this reading "Daytona Beach". And there are some facts that help support this. The original Peabody Auditorium in Daytona Beach was a venue used by the Lyceum circuit which booked Houdini's lecture tour. I've also confirmed that Amelita Galli-Curci appeared there in March 1926. Until we know for sure, I'm not going to close myself off to other possibilities. But this is exciting as it would be the first confirmed appearance of Houdini in Florida.
Thanks to David Charvet, Joe Fox, and Narinder Chadda.
UPDATE 2: Chris Berry over at Kevin Connolly's Conjuring History Facebook Group has confirmed Daytona Beach! He uncovered an ad for Amelita Galli-Curci's appearance in the Orlando Sentential. Thank you, Chris, for helping us find Houdini in Florida. 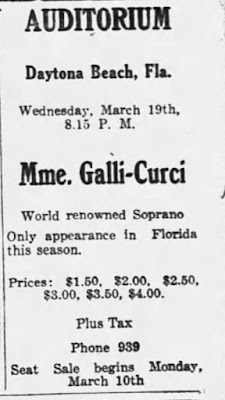