Last Thursday I had the great pleasure of going "Behind the Bookcase" with Lance Watsky of the Sherman Grinberg Film Library to share with members of the Academy of Magical Arts two remarkable reels of hitherto unknown Houdini footage. Apart from our host Shoot Ogawa getting accidentally booted offline at the start, leaving me alone to vamp for several minutes, the presentation went really well, and I think the members enjoyed seeing this remarkable film and hearing our findings. You can rewatch it by clicking "Behind the Bookcase" in the Members Only section on the official Magic Castle website. The title is "Houdini Lost & Found." 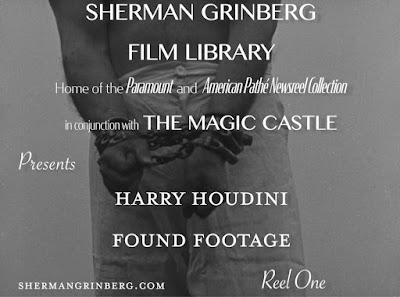 But how can non-AMA members see this film? The good news is Lance is open to posting the footage online, but we are still deciding how to do that in a way that works best for the Sherman Grinberg Film Library. But it will come. In the meantime, our good friend Joe Notaro, who was involved in the discovery and research of this footage from day one, has posted a full breakdown of both reels on his website Harry Houdini Circumstantial Evidence. Check it out!
The Sherman Grinberg Film Library is the world’s oldest and biggest privately held film archive with over 40 moving image libraries, serving Hollywood and the world film community for more than 75 years.
UPDATE: You can now view both reels! REEL ONE | REEL TWO