Latest updates in the mystery of Franz Kukol 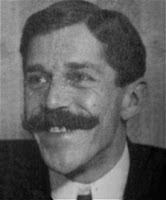 Back in December 2009 Houdini expert Patrick Culliton put forth the intriguing theory that Franz Kukol, Houdini's first chief assistant, did not leave Houdini's employment in 1914 as history has recorded and Houdini himself claimed. According to Patrick (who played Kukol in the ABC TV movie The Great Houdinis), Houdini transformed Franz into "Frank" and he continued to work with Houdini right up to the end of the magician's life.

Part of the evidence Patrick cited was a privately held letter written by Houdini in 1924 to The Roosevelt Memorial Association stating that "Frank Kukol" will come and swear that he took the famous photo(s) of Houdini and the former President aboard the Imperator in 1914.

Now David Saltman has published that very letter on his website, The Houdini File. It's a remarkable artifact that does indeed prove that Kukol was working with Houdini during the 1920s.

Also on the Franz front, recently a gentleman named Rolf R. Safferthal, a retired German electronics engineer, has come forward with the claim that Franz Kukol was his maternal grandfather. Rolf has joined the discussion on this very topic at the Genii Forums and has even posted rare unseen photos of Kukol.

Click here to read the Houdini/Frank Kukol letter at The Houdini File.

Click here to read the posts by Rolf R. Safferthal at the Genii Forums.
Written by John Cox at 7:27 PM