When Franz kept the faith 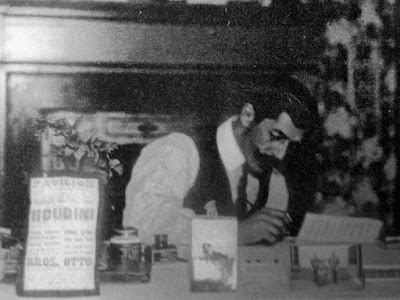 Today marks the anniversary of Houdini's hiring of Franz Kukol on March 2, 1903. So what better day for a Franz-themed post! But this story has a story behind it.

When I was a young "Houdini Enthusiast" [a moniker I should really start using again], I corresponded with various magicians, and even wrote a column for a small magic magazine called The Magician Again. Recently I discovered some letters from that time, and one from Magician/Mentalist Ron Oliver from New Lowell, Ontario, contained a curious story about Houdini and Franz Kukol that I had completely forgotten about.

The story concerns a gold watch that Houdini presented to Franz on the stage of the Finsbury Park Empire in London on March 2, 1913, as a gift for 10 years of service. But Ron's story suggests there might have been more to this gift.

Below is an excerpt from the letter Ron wrote me on December 16, 1980.

The story of the Kukol watch was told to me by a man whose father worked at the Finsbury theater in London from 1910 to 1915. He was a stage manager for the various acts that came in and, several times, saw Houdini. The full story is like this:

"One afternoon, after the matinee performance, Kukol received a telegram from his Mother, saying that she was very ill and wanted to see him. He conferred with Harry, who allowed him to go. Kukol left the theater, headed for the train. No one saw him again for about eight days.

When he finally returned, Harry was somewhat incensed at the fact that Franz had been gone so long. They retired to Harry's dressing room and a rather loud quarrel ensued. Apparently, Kukol wouldn't reveal where he had been, but did say that his mother was well. That was a week before the anniversary. The next day, Harry received a telegram from the Austrian army, from some high ranking official, asking for military help. The Austrians had heard that war was in the air, but in the future. They wanted Harry to give some of his secrets so they could be prepared....ie: handcuff slipping, cell escapes, etc.

As to whether or not Harry divulged the secrets, no body knows. But Franz and Harry had a long talk behind closed doors and emerged very good friends again. Everyone assumed the argument was over, but the guy I spoke to said that his father always felt that Franz had been asked to reveal the secrets of his boss to his old employers, the Austrian army, and refused. The would explain his being missing for almost a week. It would also explain the inscription, in Austrian, on the back of Kukol's gift watch...roughly translated, it supposedly says "To Franz Kukol...for keeping faith....Houdini."

How much of this is true, I really don't know. The guy says that his father used to tell the story whenever someone would bring up the name Houdini. He delivered all the telegrams and kept tabs on who came and went in the theater, so it seems logical that he would know.

Franz Kukol was, as you know, an ex-army officer. And the Austrian army was correct in its assumption that a war was coming soon. About 17 months after the little thing with Kukol, Franz was called back into active duty with the army. War had begun.


Of course, we now believe Kukol never returned to Austria and instead continued to work with Houdini under the name of Frank Williamson, but that is another story.

Thank you Ron Oliver for this story and memory from the past.