Houdini said he first did Buried Alive in 1908 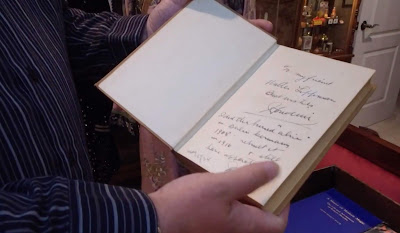 On February 23, Potter & Potter will auction the first part of The Magic Collection of Jim Rawlins. Jim is a very nice guy who has a formidable collection, including some very nice Houdini items. Jim recently shared selections from his collection in two videos on his YouTube channel.

While I encourage you to watch both videos in full, what will be of special interest to Houdini nuts is what Jim shares at 15:30 in the below video. It's a signed copy of Miracle Mongers and Their Methods in which Houdini states he first performed the Buried Alive in Berlin in 1908! [Jim also blogged about this last year.]


I'm always leery of accepting any date from Houdini, especially when written from a distance (this was written in May 1926). However, 1908 makes sense as Houdini spent two months at the Circus Busch in Berlin. Saying that he rebuilt the apparatus in 1916 gives me some pause as it seems logical the rebuild would have happened in conjunction with the poster he had made in 1914. But I don't think we have any reason to doubt Houdini here. He performed the Buried Alive much earlier than anyone thought.

Houdini saying that he still has the apparatus changes how I think we should perceive his 1926 Buried Alive. Far from being a "new" effect developed for his new season, it appears it was an old effect he was dusting off. This is likely because the publicity windfall he received for the Shelton Pool Test suddenly made adding Buried Alive to the 3 Shows In One a great idea. In fact, you can almost imagine him getting that idea right after he writes this inscription.

This find also illustrates something I've been thinking about lately. Houdini's performances in Germany are a historical blind spot. Houdini spent a lot of time in Germany, and his engagements would last for months in a single theater. This gave him time to build apparatus and try out new ideas. But we know almost nothing about these German performances, probably because the newspaper accounts and playbills are all in German! But here's an indication of what we've been missing.

This particular book is not part of this first Potter auction of Jim's collection. For more information and to view the catalog visit Potter & Potter Auctions. Jim also sells items direct at his website Magic Collectibles.

Thanks to Joe Fox for this tip.