Recently I nabbed on eBay this February 1988 issue of the Masonic journal, Knight Templar, which contains Part 2 of an article about "Brother Houdini" by Sir Knight C. Clark Julius, York Commandrey No. 21, York, Pennsylvania (that's all Mason stuff). The cover features an uncommon shot of our favorite freemason in full Master Mystifier regalia. Nice. 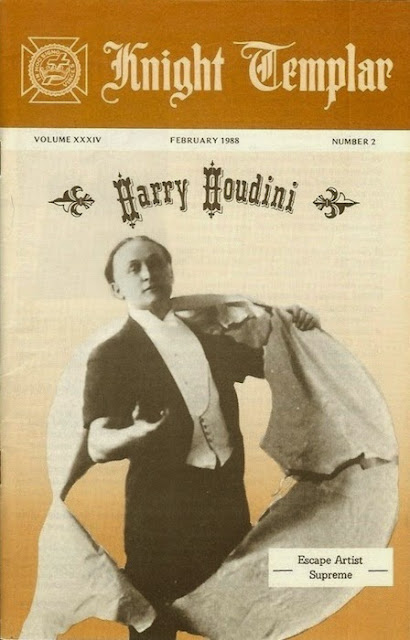 The article in this magazine is called Escape and Survive and is a biography of Houdini with a few curious additions. Among them is the "rumor" that following Houdini's escape from the Siberian Transport Prison Cell in Russia, "several secret police officers were executed as a result." (!)

That's news to me; but who am I to question an ancient Order.
UPDATE: For the most up to date information on Houdini the Mason please see: Guest Blog: Author-Lecturer-Mystifier-Mason.
Written by John Cox at 4:52 PM