In 1919 Houdini was tied to a cannon for veterans (twice) 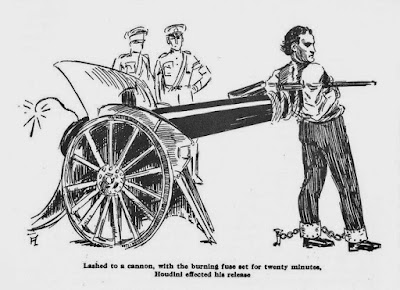 In England in 1911 Houdini accepted a challenge in which he was tied to the mouth of a cannon with a lit fuse. While no photos of this escape have ever surfaced, the cannon challenge is iconic enough to have been depicted in two Houdini biopics. Most biographies record this as being the only time Houdini ever did this stunt. But I recently discovered that he repeated the cannon challenge in Los Angeles in 1919...twice!

The first occurred on April 26, 1919, just a few days after Houdini arrived in the city to begin work on The Grim Game. Houdini was part of a troupe of Famous Players-Lasky artists who gave a charity performance at the "Victory ship" in downtown's Pershing Square. This was part of a nationwide effort to raise funds for The Victory Liberty Loan, a drive to help returning soldiers from World War I. Below is an ad for the campaign. 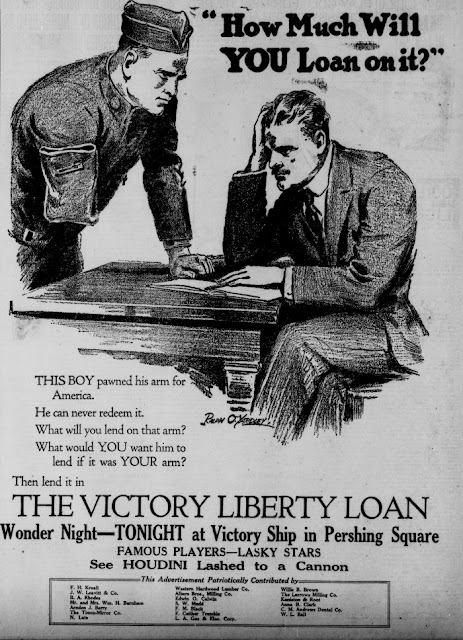 This ad is pretty wild and emblematic of the drive. The Liberty Loan was an aggressive campaign that was not above shaming people into donating. Newspapers actually printed the names of wealthy or prominent citizens who had not contributed as "Liberty Loan Slackers" (a "slacker" was a draft dodger). But this particular ad is notable on that it mentions the Lasky Stars and advertises Houdini's escape:

Below are details of the upcoming escape as reported in the Los Angeles Herald on April 25, 1919: 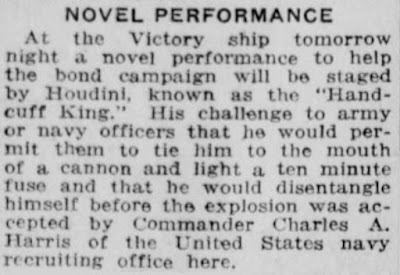 What exactly was the Victory ship? Try as I might, I could not find any photos of it. But from a later newspaper account about its dismantling, I'm assuming it was a temporary stage set up in Pershing Square made to resemble a battleship perhaps?

A few weeks later, the Lasky stars were back at the Victory ship, including Houdini's future Terror Island co-star Lila Lee. Houdini repeated his cannon challenge, as reported in the May 10, 1919 Los Angeles Herald: 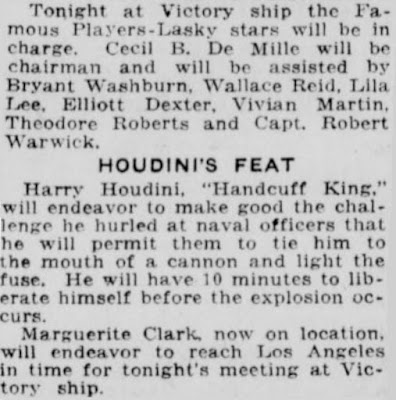 Unfortunately, I couldn't find any photos or news accounts of how either challenge played out. Presumably he made it! But many stars performed at the Victory ship, including Charlie Chaplin, and I could find no account of what they did either. I believe it would have been considered bad form to use a charity event to promote oneself. This was about veterans, and even Houdini was restrained. But that leaves us to only guess what this escape looked like.

At the top of this post is an illustration of Houdini tied to a cannon which is the only depiction of the challenge I've ever seen. (This comes from The Original Houdini Scrapbook by Walter B. Gibson.) The illustration appears to be based on the 1911 escape, which is well described. But this could also have been how he was restrained in 1919. Unless...

Below is a photo of Houdini tied to the wheel of a cannon. Could this have been taken at the Victory ship? This is Houdini in 1919, and the cannon he is roped to is clearly a piece of World War I ordinance. While this isn't how the challenge was advertised, the cannon may have been too large for him to be tied to the mouth, so maybe this is how he actually did the escape? Or this photo was taken after the fact. The edifice behind him does appear to be some sort of temporary structure which could be the Victory ship. 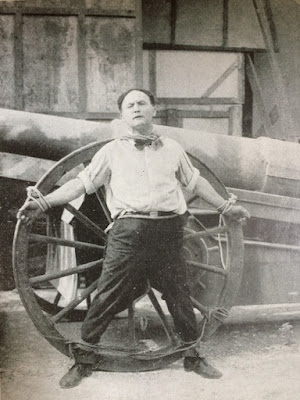 When I first uncovered these two challenges, I had hoped to do what I did for his 1915 suspended straitjacket and his 1923 Ambassador Pool escape. But I came up short in my research. So I'm offering up what I have in the hopes it will unlock more info. But at least we now know that it happened. Houdini was tied to a cannon in Los Angeles' Pershing Square in 1919...twice!

Honoring all who have served on this Veterans Day.

UPDATE: Turns out an account of this escape (one of them, at least) appears in The Grim Game pressbook. Thanks to Joe Notaro. 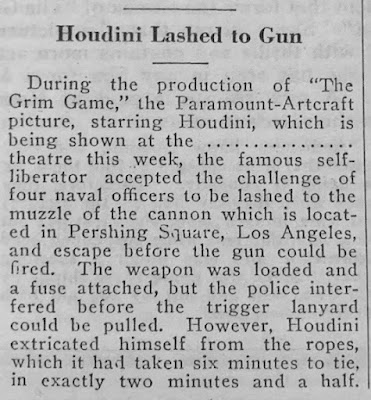 UPDATE 2: Our great friend Bill Mullins has come through with a photo of the Victory Ship! As suspected, it's a stage made to look like a ship. This is from the May 3, 1919 Los Angeles Times.