Here's another excerpt from High Lights in the Strenuous Career of Harry Houdini, Edited and Compiled by Houdini's Brother Hardeen. (Hey, could we consider this the first Houdini documentary?) This rare footage comes from the collection of escape artist Rick Maisel who has kindly granted me permission to share select clips here on WILD ABOUT HARRY.
This time we see an impressive underwater rope escape from start to finish. Fragments of this footage have shown up from time to time. But like the Houdini-Kellar Rope Tie, this clip appears largely complete. And the end with Houdini climbing back up on the wharf and blowing us a kiss (!) is entirely new to me. So drink it in!
The big question here is why, when, and where was this shot? In 1917 Houdini performed an underwater escape in Atlantic City in which he stipulated that he should be "thrown head first" into the water. That is certainly what we see here. But in that challenge he was shackled, not roped, and this is clearly Houdini at a later date. Also, this doesn't appear to be a public challenge. Where is the crowd?
The extensive "coverage" of shots suggests to me that this was done specifically to create this film clip, not unlike the famous monk "challenge" filmed on the set of Haldane of the Secret Service. As to location, there is one clue in the footage itself. Near the end a barge (or ferry?) passes behind the group bearing the name and logo of the New York Central System. 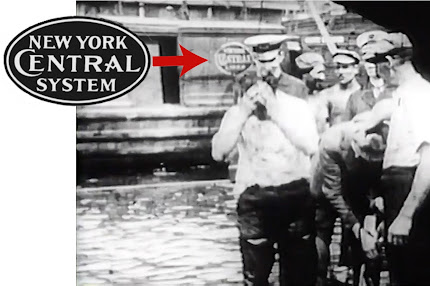 Doing some research, I found that the New York Central railway had a ferry connection in Weehawken, New Jersey. That is where Houdini's film lab was located. So this could very well could be Weehawken wharf in 1921 when Houdini was most active in making his films. 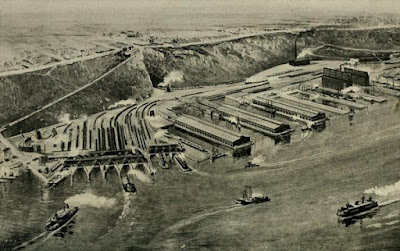 By the way, in the 1970 BBC documentary The Truth About Houdini there is a shot from this same stunt that shows Houdini falling back into the water after the rope break or slips. This "outtake" is yet another reason I think this was staged for the cameras only. 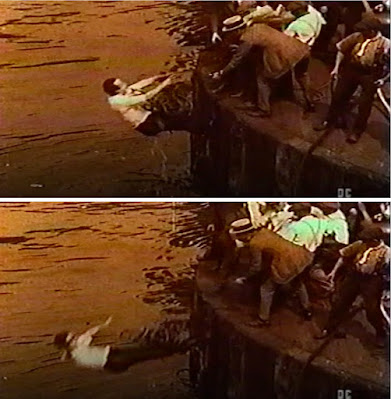 Hope you enjoyed this rare clip. In the next installment I will share footage that is 100% unseen and from a notable outdoor escape.
Thanks to Brad Hansen of Retro Cars Forever for his editing assistance. A playlist of these clips can be found on the WILD ABOUT HARRY YouTube Channel.