On May 15, 1976, the BBC documentary The Truth About Houdini aired on American television for the first time. The film footage in this well-made documentary was for many (including myself) their first look at the real Houdini in action. Along with the new books, the Doug Henning specials and The Great Houdinis, the airing of this first major Houdini documentary in the U.S. was part in the great "Houdini renaissance" of the 1970s.

The very first screening in the U.S. was at Ulster County Community College in Kingston, NY, on November 9, 1975. Curiously, newspaper accounts record the title as "The Great Escape Artist." The screening was attended by Walter B. Gibson and Sidney Radner who introduced the film and participated in a Q&A.

Following its U.S. television premiere on May 15, 1976, which was local to Southern California, The Truth About Houdini aired on local televisions stations across the country. In Tampa, Florida, WTOG-TV aired it back to back with the Tony Curtis biopic Houdini over the Halloween weekend. It remained in circulation until 1979.
In addition to the rare film footage (credited as coming from the collection of Larry Weeks), The Truth About Houdini contains interviews with Milbourne Christopher, Walter B. Gibson, James Randi, and Sidney Radner. Radner's demonstration of Houdini's full body punishment suit escape was cut for time in some later airings. Today it's quite horrifying to behold Radner thoroughly abusing this valuable Houdini artifact. (It sold for $11,000 in 2014.) 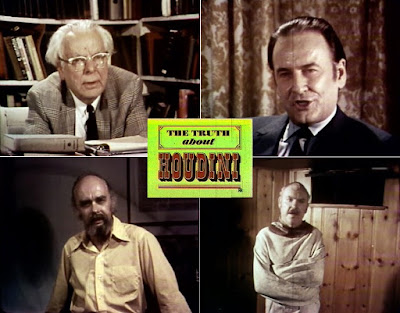 It's not generally known that the producers of the documentary secured permission to use the Houdini voice recordings discovered in 1970 from the widow of John Mulholland. They even acquired high quality reproductions of both Water Torture Cell speeches. But for whatever reason, Houdini's voice was left out of the final cut.

While now dated, The Truth About Houdini is still a fascinating documentary and must watch for all Houdini buffs. While it has never been commercially released on home video, a bootleg version under the title "The Magic of Houdini" (not to be confused with the Alan Davies doc of the same name) has appeared from time to time. Currently Amazon has it available as a streaming video.