Hardeen: The Man Who Walked Through Walls 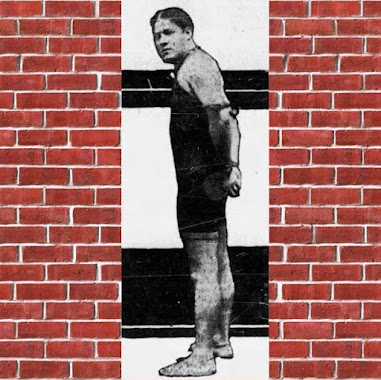 We are all familiar with Houdini's famous Walking Through a Brick Wall illusion. It's one of the tricks that has become iconically associated with him -- "The Man Who Walked Through Walls". However, not many people realize Houdini only did the effect for a single week at Hammerstein's Victoria theater in New York in July 1914. And that was it! For Houdini, at least.
Houdini passed the effect to his brother, Hardeen, who appears to have first performed it at the Bowdoin Square Theatre in Boston in January 1915. He then continued to periodically feature it on his 1915 tour. Hardeen penetrated walls in: Hartford, Connecticut; Bridgeport, Rhode Island; Wilkes-Barre, Pennsylvania; Spokane, Washington; Calgary, Alberta; and Victoria, British Columbia. The last performance I can find was in Fort Wayne, Indiana, in March 1916. This means Hardeen did Walking Through a Brick Wall many more times than Houdini!
Below is a nice ad for Hardeen's performance of the effect in Calgary. I love the headline: "BRICKS and MORTAR vs. FLESH and MUSCLE."
Below is the best overall description of the effect as Hardeen performed it. It's pretty much exactly as Houdini did it, right down to the two rug coverings. Wonder if he also wore the white duster? Unfortunately, I don't know of any photo showing Hardeen and his wall.
Here's some evidence showing how Hardeen became independently associated with the effect.
Walking Through a Brick Wall was not without controversy. Houdini had purchased the secret from magician Sidney Josolyne in England. However, P.T. Selbit claimed to have invented it and accused Joselyne and Houdini of theft. Along with the wall Hardeen inherited the controversy and continued to exchange barbs with Selbit into the 1920s. I'm not aware of Hardeen performing the effect after Houdini's death, but Sidney Radner recalls seeing the apparatus among Hardeen's belongings in the 1940s.
In 1939 Hardeen appeared as a guest on WNYC's "Voice of the Theatre" radio program (which you can listen to HERE). The interview begins with Hardeen seeming to make a mysterious appearance in the studio. Host Ezra Macintosh asks how he got in with the door being closed the whole time. Hardeen's answer: "Why I'm the man who walked through brick walls."
Indeed! 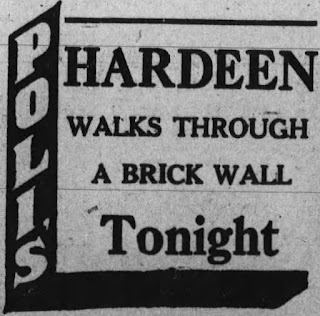