Our friend Roger Dreyer of Houdini Revealed will give a virtual talk for the Union Public Library this Tuesday, March 22 at 7 PM EST. Below are details. 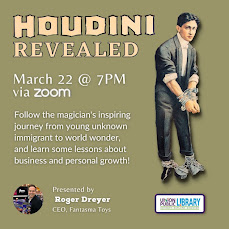 How Harry Houdini, “The King Of Handcuffs,” created a persona so dynamic his name is still spoken daily despite passing almost 100 years ago. Houdini’s compelling story as a young immigrant, from being unknown to world wonder, is filled with remarkable lessons about business and personal growth. Join Roger Dreyer, CEO of Fantasma Magic and Houdini Revealed, to learn the secrets behind Houdini’s magical success.

The talk is free, but registration is required.

Email ThisBlogThis!Share to TwitterShare to FacebookShare to Pinterest
Tags: Events