When Houdini walked through a brick wall 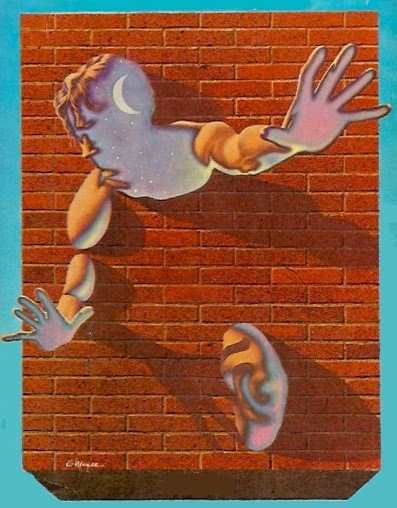 It was 100 years ago today that Harry Houdini first walked through a brick wall at Hammerstein's Roof Garden and Victoria Theatre in New York. Even though he only performed the illusion for a short time, it has become part of his legend, and he is still known as "the man who walked through walls" today. So on this anniversary, here's a look back at this spectacular magic effect.

When Houdini returned from Europe in late June 1914 to fulfill his regular July booking at Hammerstein's Roof Garden and Victoria Theatre in New York, he intended to make a splash. He promoted his appearance with a spectacular Overboard Box escape off Battery Park, and during his first week (July 6) he presented his Chinese Water Torture Cell, which was still relatively new to American audiences. But Hammerstein's required a performer change their act each week, so during his second week, Houdini revealed a dramatic new magic effect: Walking Through A Brick Wall. 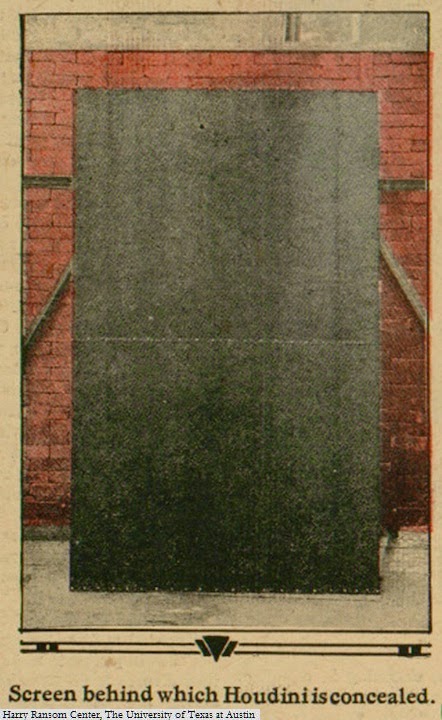 Houdini first presented the illusion during the Monday matinee performance on July 13. It was an especially hot day in the city, and before the start of the show, a special announcement was made that any man might remove his coat. Many took advantage of this. Houdini was the 8th act on the 13 act Vaudeville bill -- the closing act before intermission.

What the Hammerstein's audience saw on that hot July day was a brick wall, 9 feet tall and 10 feet wide, rolled out and placed atop a carpet and a sheet of muslin laid out on the stage floor to insure no trap doors were used. Audience members were invited onstage to examine both the wall and stage coverings, some were even given hammers to test the wall's veracity. The audience members then surrounded the wall so that it was visible from all sides at all times. Houdini, dressed in a long white duster, took his place at one side of the wall "like a prisoner awaiting execution." A screen was placed over the magician and another screen was placed on the opposite side of the wall. Houdini waved his hands above the screen and said, "Here I am." Then his hands vanished and almost instantly reappeared from the screen on the other side. Both screens were pulled away to reveal that Houdini had seemingly walked through the wall.

Billboard reported that, "The audience sat spellbound for fully two minutes after this feat was accomplished. They were too dumbfounded to applaud." 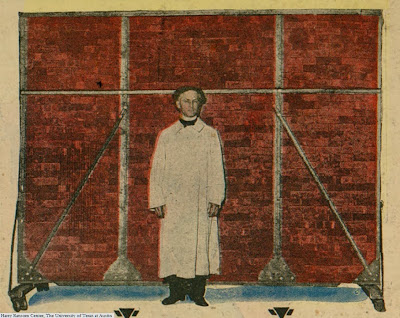 It was a good effect, but unlike the Milk Can and Water Torture Cell, it was not an original Houdini creation. During a magic spending spree in England (where he had tried out his first all-magic show, the Grand Magical Revue), Houdini purchased the secret for £3 from magician Sidney Josolyne, whose original plans called for a wall of steel. Controversy would later erupt over whether the secret was Josolyne's to sell. Magician P.T. Selbit claimed to have invented it and accused Joselyne and Houdini of theft. Alexander also claimed to have performed a similar effect in the 1890s using blocks of ice. But the controversy remained largely on the other side of the Atlantic, and it was an inspired touch by Houdini to change Josolyne's steel wall into one made of brick.

As he had done with his Water Torture Cell, Houdini copyrighted his new effect by writing it into a short playlet he called (what else?), "Walking Through A Brick Wall." In the play, a young man named Jack comes to the home of wealthy Richard Sterling to ask permission to marry his daughter, Alice. As Jack is the son of Sterling's "mortal enemy," the man refuses, saying:

Sterling: Nothing. Not even if you had all of the money in the world. It would take a big miracle to make me change my mind; say fly though the air without a flying machine or walk through a brick wall.

Jack: Maybe I can do that.

Sterling: The day you can walk through a brick wall that separates our houses, I'll give you my daughter.


In Act II, Jack succeeds in penetrating the brick wall in Sterling's garden and wins the hand of fair Alice.

Alice: Jack, did you really walk through that brick wall?

Jack: Alice, whether I did or not, everything is fair in love and war. (Embrace. Curtain.)


It's unclear whether the play was ever performed. Houdini received his copyright on July 15. (The full text of the play appears in Houdini's Strange Tales by Patrick Culliton.)

Walking Through A Brick Wall proved to be a sensation during Houdini's run at Hammerstein's. During one performance, laborers from the bricklayers Union No. 34 "turned out in force." One man, dressed in his work clothes and "flashing a trowel, proceeded to hammer away at some of the bricks" until "several were pried loose." In a confrontation almost certainly pre-arrange by Houdini, the bricklayers challenged him to walk through a wall made of their own construction. Houdini accepted the challenge, and before a packed house on the following Friday, he beat the bricklayers wall.


It's interesting to note that Houdini also performed his Double-Fold Death Defying Mystery -- an enhanced version of the Milk Can escape -- during the same 29 minute act in which he featured Walking Through A Brick Wall (he also did the Needles). While the Brick Wall illusion grabbed the headlines, Houdini knew his audience still expected him to defy death.

Houdini may have only performed Walking Through A Brick Wall during this one week at Hammerstein's. During his third week, he featured a submerged box escape. Ken Silverman in Houdini!!! The Career of Ehrich Weiss said he later presented the illusion at Keiths Theater in Boston, where he was again challenged by the bricklayers union. However, I've not been able to find any evidence of this Boston performance (and some evidence to the contrary).

After this short run, Houdini passed Walking Through A Brick Wall to Hardeen, who would present it at the Bowdon Theatre in Boston in January 1915. The press claimed that Hardeen "is the originator of it." Hardeen also inherited the controversy with P.T. Selbit, and they continued to exchange barbs into the 1920s. It might have been good research or a happy accident that in the 1976 TV movie, The Great Houdinis, Hardeen (played by Jack Carter) says as he's about to take the stage: "Excuse me. I gotta walk through a brick wall. Hope I make it."

Why did Houdini abandon Walking Through A Brick Wall so quickly? Some say the effect lost its appeal because the secret was known to so many, including stagehands. It's also possible Houdini was uncomfortable with the invention controversy. Curiously, the secret of Walking Through A Brick Wall was offered for sale in September 1914 by a company calling itself "New York Magical Exchange" located at 30 E. 42nd Street. The company even claimed to have a copyright. The fact that Houdini did not take legal action (or worse) leads Houdini expert Patrick Culliton to suspect that Houdini himself was behind the business.

The frame used in Walking Through A Brick Wall survived. It was passed to Sidney Radner by Hardeen along with so many other important pieces of Houdini apparatus. But Sidney revealed to Patrick Culliton that the frame was stored outside behind his house and eventually rusted away. What a loss.

Walking Through A Brick Wall has become a part of Houdini's legend. William Lindsay Gresham titled his groundbreaking 1959 biography, Houdini The Man Who Walked Through Walls (in which he also revealed the secret), and a 1975 paperback edition of Milbourne Christopher's biography, Houdini The Untold Story, featured on the cover a beautiful painted image of Houdini penetrating a brick wall (artwork at the top of this post).

There have also been some notable modern interpretations. After doing the Water Torture Cell and Vanishing Elephant on his first two live television specials, Doug Henning did his own version of Walking Through A Brick Wall in 1978. David Coppefield later upped the ante when he walked through the Great Wall of China. In both cases, these two modern masters of magic properly paid tribute to Houdini as the original "man who walked through walls."