Here's a photo that you'll sometimes see credited as being Houdini in Egypt. However, this clipping from the March 3, 1912 Virginian Pilot identifies it as being "Aden Arabia". Houdini did indeed stop off in Aden (Yemen) during his journey to Australia in 1910. This would have been after his stop in Port Said, Egypt. I'm not sure I buy the claim that Houdini escaped from their jail. I think this pic is all about the camel. 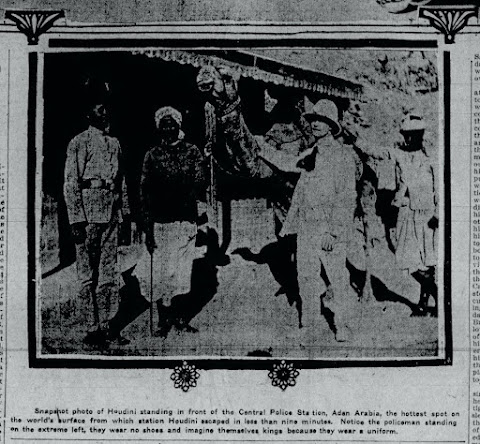 This appeared as part of a full page profile that ran in anticipation of Houdini's appearance at the Colonial Theater in Norfolk, Virginia, in March 1912. This would mark his first and only appearance in the city and proved to be one wild week! I'll be sharing that story soon...

BONUS: Our good friend David Haversat of David Haversat Magic has sent over this image as a beautiful first generation photo from his own collection. You can see it on my new WILD ABOUT HARRY Patreon by joining at any level. Just click the image below to go:

Below are some more posts about Houdini the world traveller.
Related:
Written by John Cox at 7:41 AM