See 'Houdini A Magician Among The Spirits' in the UK

A new play by Richard Melchior and Joshua Pickering, Houdini: A Magician Among The Spirits, will tour the UK this month. This Thursday, July 7, the play can be seen at 2 Sisters Arts Centre in Felixstowe. It then moves to Bungay and the Fisher Theatre on July 8. On July 14 it will be at The Seagull in Lowestoft. On July 15 you can catch it at The Place in Bedford. 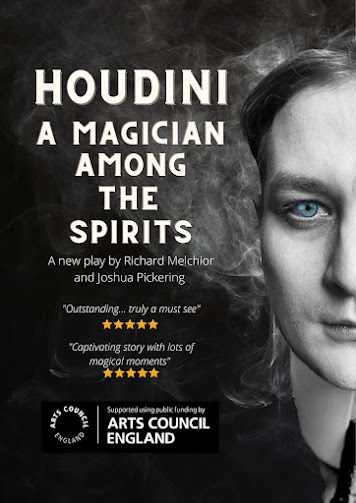 Do Spirits Return? Harry Houdini believes they don’t and sets out to expose the popular tricks of the Victorian psychics. Houdini: A Magician Among The Spirits follows the master magician as he lays bare the Seance room, tackles charlatans, navigates a troubled friendship with Arthur Conan Doyle, and performs some of his most famous tricks and escapes.

In a modern age of lies and spin, does Houdini’s scepticism and logic have a resonance? Or does a lack of belief lead to a barren life? Where is the line between magic and misdeed?

Houdini: A Magician Among the Spirits is haunting and inescapable fun.

This play is funded by Arts Council England.

For more information and to keep up with future performances visit www.houdinishow.co.uk.