A new interactive play, Hurry Houdini, will debut at Midnight Temple in Detroit on Saturday, July 30 at 8pm. The play features Jake Mate as Houdini, Stephanie Stoiko as Bess, and Kristina Camaj as Houdini's fictional manager, Suzi. The show is the creation of Wild Wonder Productions and sounds like a lot of fun! Details below. 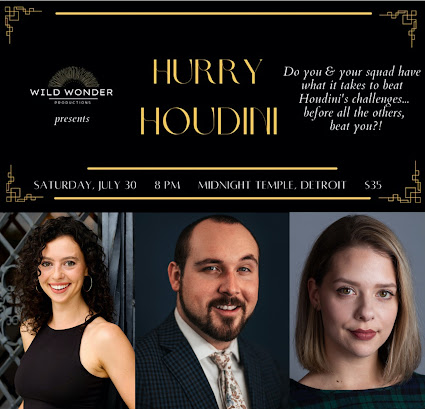 Hurry Houdini is an interactive play based in 1922, get your best squad together to compete against all the other teams, you must work together in order to beat Houdinis challenges! Do you have what it takes? ...only time will tell.

If you have a fun competitive spirit, love to dress up and play, and enjoy escape rooms, then Hurry Houdini is the show for you! Come with friends, family, a date or solo!

Hurry Houdini premieres Saturday, July 30, 8pm at Midnight Temple in Eastern Market, Detroit. Tickets are $35. Free glass of champagne with every ticket purchased, cash bar only, dress up in your best roaring 20s attire, enjoy our many raffles to win amazing prizes around metro Detroit! Portions of the proceeds go to Children's Hospital of Michigan.

Space is limited, hope to see you there!

Following this Detroit performance, Hurry Houdini will go on tour with Armed Forces Entertainment to provide entertainment for the United States military and their families overseas. The troupe will appear in Greenland, Puerto Rico, and the Bahamas, August 3-12. It then heads to Guantanamo Bay, Cuba, October 27- November 1, 2022.
You can follow Wild Wonder Productions and keep up with all the latest Hurry Houdini news at their Facebook and Instagram.
Thanks to Kristina Camaj.
Related:
Written by John Cox at 7:39 AM