A new book by mega collector Arthur Moses has just appeared on Amazon. This is an exciting and essential new Houdini resource from the man who has it all! Here's a description of The Houdini Pitchbooks. 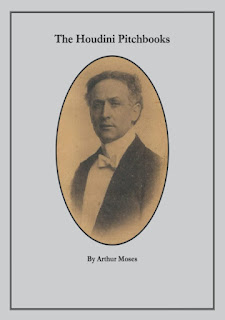 Harry Houdini (1874-1926) was the quintessential immigrant success story. Brought to America as a small boy, his family had little means of financial support. Yet young Erik Weisz (birth name) rose above his family’s poverty and became the world’s most renowned escape artist, magician, and debunker of spiritualists. He was fearless when taking on a challenge and incapable of accepting defeat.

Pitchbooks, as they were known, were commonly used by performers and businesses in the latter 19th and early 20th centuries as an expansion of early playbills or advertising. Instead of a single sheet flyer, these multi-page pamphlets enabled the advertiser or performer to further extol their talents or products while generating additional financial revenues.

Includes all the known Houdini pitchbooks and their variants. This body of work includes over 40 different rare pitchbooks, including their cover images, along with the history of each. Variants include such differences as cover colors, page counts, minor text changes, revised editions, publication dates, printers, etc. An unmatched and valuable resource guide.

Arthur dedicates the book to our late friend John Bushey, who always wanted to publish a work such as this.
You can purchase The Houdini Pitchbooks in hardcover or paperback at Amazon.com and Amazon.co.uk.
Other works by Arthur are: Houdini Periodical Bibliography, Houdini Speaks Out, and Harry Houdini & Sherlock Holmes Together Again In 1908.