'HOUDINI THE KEY' HAS ARRIVED 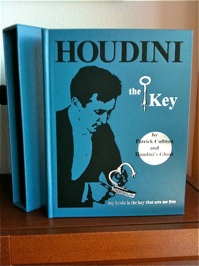 What better day than Halloween to announce the publication of HOUDINI - THE KEY, Patrick Culliton’s major new book which reveals many of Houdini’s most closely guarded secrets.
I’ve just picked up my copy (#25) and I can tell you the book is a stunner! It’s a mammoth 460 pages, profusely illustrated, and comes in an attractive slipcase. There are many photos I’ve never seen, including a rare shot of Houdini and Boudini in their challenge shackles and bathing suits, and sequential stills from rarely seen footage of Houdini performing the Thumb Racket. Also revealed, in photos, are the working methods of Metamorphosis, the Milk Can, and the Water Torture Cell.

Says Patrick, “I wanted to write a textbook on how Houdini did it, a book that would open a thousand doors.”

Patrick will start shipping the book tomorrow to those who have pre-ordered. The release is limited to only 278 copies (with a majority already sold out).

If you act quickly you can still get a copy of Houdini - The Key for $195 + $12 shipping. Visit Houdini's Ghost for details on how to order.