Not to be overlooked in all the big Houdini news this week is the very intriguing new book, Rosabelle, Believe

by Michelle Cushing, due to be published on Halloween (but shipping now from Amazon 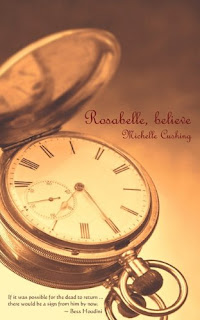 A tale of love so great it transcends death. A believer in magic, poet Eric Pilot - a man filled with so much love that his dark eyes literally flicker - believes he is the reincarnation of Harry Houdini. See, Eric believes death is a ruse, life's one incredible magic trick, and he has only one goal - to be reunited with his beloved. On a train bound for Hot Springs, Arkansas, he meets another master of illusions, reserved archivist Dawn Corner, a woman who spent her life fermenting on a vineyard with an unloving family. She has no concept of magic. Not a single belief. Not one thought or inclination. Eric, however, is a man of stupendous magic, and he ignites an ember within her. As a newfound fire rages inside Dawn, she begins to believe in magic too. But will she ever be able to accept that Eric is the reincarnation of Houdini ... and she is his wife Bess?

In her third novel, Michelle Cushing follows in the footsteps of other lyrical, Southern writers such as Tennessee Williams and Eudora Welty. "Rosabelle, believe" ignites like flint against steel, taking readers on a journey as alive and fragrant as a green leaf in spring. It is a story of two unique, tragic characters - one cold like funeral black, the other pure fire - trying to find a balance between mystical and logical, light and dark. Join them as they meet in a place where love's clever sleight of hand spans beyond conventional time.


You can read an online excerpt from Rosabelle, Believe HERE.
Written by John Cox at 11:30 AM