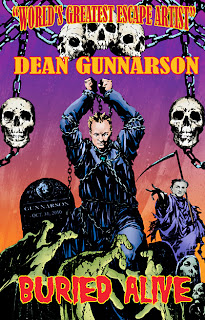 Winnipeg - On Friday Oct 29, 2010 at 7:00 P.M. Escape artist Dean Gunnarson will attempt his most difficult, daring, and challenging escape of his career. Gunnarson will be chained, locked, and bound and placed inside a steel coffin. The lid will be locked on and wrapped in even more chains and locks on the outside. The coffin, with Dean securely locked inside, will be lowered 6 feet underground and he will be buried alive with over 3 tons of dirt dumped on top of him.

Gunnarson must survive two days underground locked in the coffin with no food or water and without panicking or going insane. Dean will then attempt to escape on Sunday Halloween Day around 1:26 P.M. The exact day and time the Great Houdini died in 1926. Will Dean survive this underground hell or will he get his boy hood wish of dying the same day his mentor did? Houdini wrote in his diary that this escape was "very dangerous" and that "the weight of the earth is killing." He vowed never to even attempt it!

"I know that from a physical and mental stand point this will be my most challenging escape ever," said Gunnarson. "The last time I was locked in a coffin I died. I never wanted to be in another one and I never have. I will have to conquer all my personnel fears and demons to make this escape on Halloween."

Gunnarson is referring to his failed coffin attempt back on Halloween 1983. He was underwater for nearly 4 minutes before the coffin was raised back out of the murky waters and rescuers found his blue lifeless body. Winnipeg Paramedics rushed him to the Health Science Center where they brought him back to life. Even though that escape nearly cost him his life, it made Dean even more determined to do what others said was impossible. Since then Dean has travelled the world performing his amazing and death-defying escapes to millions of people in China, Japan, Iceland, India, Egypt, Europe, South America, U.S.A. and Canada.

Recently returning from China, where he was filming a TV special, Dean was hit by a speeding roller coaster at over 100 km's while leaping from the tracks after being chained to them. Dean suffered a broken foot and some internal bleeding but said, "It all goes along with the job."

This Halloween Gunnarson will attempt to take his escapes to a new depth. "I have seen the lights at the end of the tunnel and now I will experience a living Hell for 2 days. I am glad it's happening in my home town of Winnipeg and everyone can come cheer me on. I will need all their help this time!!!"

A camera will be inside Dean's coffin prison so people can come down and watch him on two big screens. There is also family fun Saturday with a petting zoo, paint ball, archery, pizza, face painting, and many more fun things to do. Saturday night will be a special Halloween party inside the Golf Dome. People will party as Dean is buried underground. Admission is free with a donation to the Christmas Cheer Board who will be onsite. For more information go to www.canadianeventscalendar.com