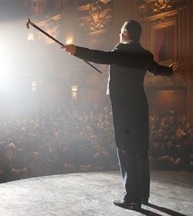 Some potentially good news here. Hugh Jackman says the Broadway Houdini musical, which was first announced way back in April 2008, is moving forward.

“We’re going to do a workshop of that in January [2011], so we’re off and running,” he told Broadway.com on opening night of Driving Miss Daisy. “We have some amazing people on board: Aaron Sorkin, Danny Elfman, Jack O’Brien. It’s going to be a really, really interesting group, so I’m excited.”

But the star cautions it’s just one of several stage projects in development. “I’m working on two or three things, because I don’t want to be away from the stage for too long,” he said. “New musicals take a long time to get into shape, so I have a feeling it may be something else first. But if [Houdini] is ready, I’ll do that. I’m practicing my magic tricks right now.”
Written by John Cox at 10:22 AM