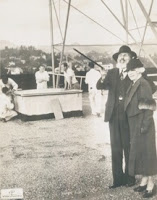 Here’s something I don’t think I’ve ever heard before. Bess Houdini and Ed Saint originally announced that the tenth and final Houdini seance would be held on a mountain top.

An AP article dated April 24, 1936, reports “Plans for the last attempt, Mrs. Houdini said, call for a public seance on a mountain top, possibly with a nationwide radio hook-up.”

Of course, ultimately the seance was held on the roof of the Knickerbocker Hotel in Hollywood on Oct 31, 1936. While Houdini didn’t speak from beyond the grave that Halloween night, some feel a surprised storm following the conclusion of the seance was Harry’s way of saying to Bessie...”BELIEVE.”

You can hear a recording of the full Final Houdini Seance HERE.