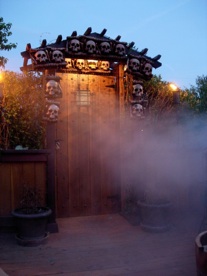 The Forrest of Mirrors, a popular Halloween haunted house held in the former home of Buster Keaton in Woodland Hills, California, will this year include a Houdini-themed surprise.

NBC reports that owner and “Halloween fanatic” Philippe Bergeron, who has been hosting this haunted house for several years, just recently discovered the connection between Houdini and the previous home-owner.

“A year ago, I wondered what if there was a relationship between Buster Keaton and Harry Houdini, I Goggled the two names and discovered Houdini was the godfather of Buster Keaton,” said Bergeron.

“That’s amazing, and Houdini died on Halloween, so its all connected; I was meant to buy this house and do all of this.”

Bergeron says this year his haunted house will include a nod to Houdini, but he is keeping secret exactly what that surprise will be (see clip below).

Okay, I have plans on Halloween, but I’m going to do my best to get out to Woodland Hills and see this. This sounds like fun on many levels!

You can check out “The Forest of Mirrors” in Woodland Hills at 6124 Lederer Avenue. It’s open free to the public Halloween night 6pm to Midnight. Visit their website for more information: www.forestofmirrors.com.
Written by John Cox at 1:10 PM