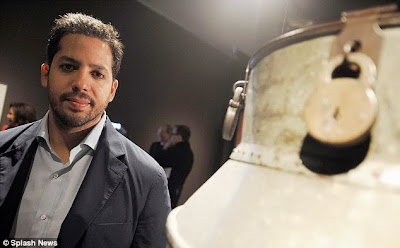 David Blaine was on hand yesterday for a press preview of Houdini: Art and Magic, the major new Houdini exhibition which opens this Friday at The Jewish Museum in New York. The New York Times reports:

Blaine seemed captivated by the jerky black and white movie clip, projected a few steps from the entrance to the exhibit, showing Houdini wriggling out of a straitjacket. He was hanging upside down over a crowd, as he so often was.

"I don’t know anybody who does anything like this today," Mr. Blaine said with what sounded like unbridled admiration.


The Daily Mail also has coverage of the day with many pics from the exhibit itself.

Visit The Jewish Museum website for more information on Houdini: Art and Magic.
Written by John Cox at 12:48 PM