The Hearld Democrat reports that the Denison Development Foundation is hoping to bring new life to the historic Hotel Denison in Denison, Texas. Why is this of interest to us? Check out what they have to say about the hotel's history: 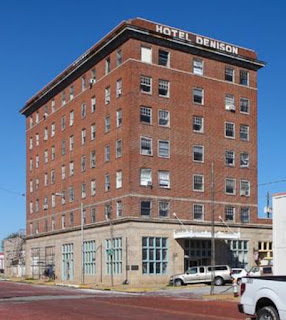 The Hotel Denison first opened its doors at the corner of Chestnut and Burnett in October 1924 as the Simpson Hotel. This followed a fire in 1920 that destroyed the original Hotel Denison.

In the Oct. 14, 1924 edition of the Denison Herald, famous illusionist and escape artist Harry Houdini was quoted as saying "nowhere in my travels have I found a hotel any better equipped and with better accommodations" about the Hotel Denison.

The hotel continued to offer daily rates until 1986, when it shifted to monthly rental rates.


Houdini was in Denison during a seven-day tour of Texas with his spiritualism lecture in 1924. It was at this time that he infamously appeared at a Ku Klux Klan Auditorium in Fort Worth (although not at a Klan event). These were his last appearances in Texas.

So was this really the best hotel Houdini ever stayed in, or was he just giving the new hotel a friendly plug? Another Houdini mystery!

Email ThisBlogThis!Share to TwitterShare to FacebookShare to Pinterest
Tags: [History], 1924, Quotes, Texas, Then and Now