Here's a unique one. This souvenir card from a 1925 Cleveland Magicians Club event with Houdini and Servais LeRoy sold on eBay over the weekend for $2,080. The card is signed by Houdini, LeRoy, and Bess "(me too)." Houdini was performing at the Palace Theater in Cleveland at this time. 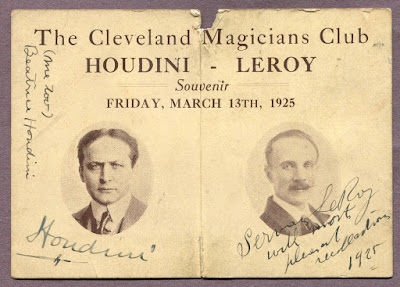 Seller description: For your consideration is this rare original signed card from the Cleveland Magicians Club featuring Harry Houdini and Servais LeRoy.

LeRoy was a Belgian magician, illusion designer and businessman. He was credited as the inventor of the classic levitation illusion called Asrah the Floating Princess. He performed for many years in Belgium, London, and the US, among other places. He was a true innovator and inventor in the field of magic.

It is rare to find signed Le Roy items, but in combination with Houdini's and Bess's signatures, this makes this a historic and likely a one of a kind piece of history. It would make a fantastic addition to your collection.


Well, it appears it did make a fantastic addition to someone's collection! (Our friend Dale from Cleveland perhaps?) Congrats to the winner.
Written by John Cox at 8:13 AM

Email ThisBlogThis!Share to TwitterShare to FacebookShare to Pinterest
Tags: Auction, Bess, Other magicians