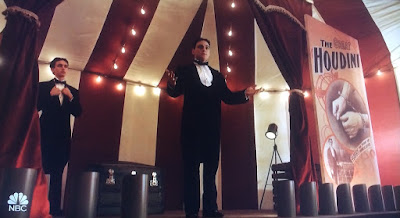 Houdini appeared on the NBC series Timeless last night in an episode called "The World's Columbian Exposition" set during the 1893 Chicago World's Fair. It was great fun. Actor Michael Drayer played the young Houdini as fearless, resourceful and heroic. The episode also contained a few surprises, including an appearance by Dash played by Leo Beckwitt (now the 6th actor to portray Hardeen on screen), and even a mention of Bess; a heads-up for Harry from our time travelers.

For those who missed it, the good news is the full episode is available on the Timeless page at NBC.com through May 25, 2017. 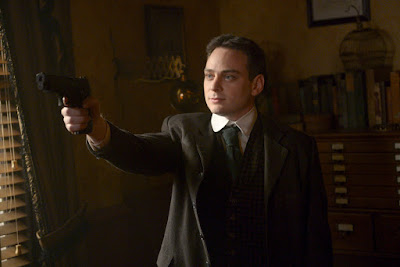 As far as the history goes, Houdini did indeed perform at the Columbian Exposition in 1893 at the start of his career, although it was with his first partner Jacob Hyman and they were billed as The Brothers Houdini. The set designer created some mock-up posters based on King of Cards and Metamorphosis, mixing in images of Houdini from later in his career. Houdini being forced to unlock a door at gunpoint reminded me to his Coffeyville exploit. And for those who felt bad for Harry when Lucy rejected his proposal to "team up" at the end, know that Bess will come into his life the following year (1894). 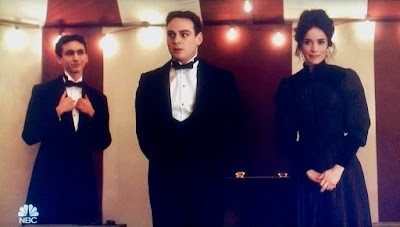 Timeless is about a team of time travelers who protect the present in the past. It airs on NBC on Mondays at 10/9c.