Check out this image of Houdini with Jennie his vanishing elephant on stage at the Hippodrome theater. This comes from Houdini's The Adventurous Life of a Versatile Artist pitchbook and is an image that we are all familiar with. Or is it? 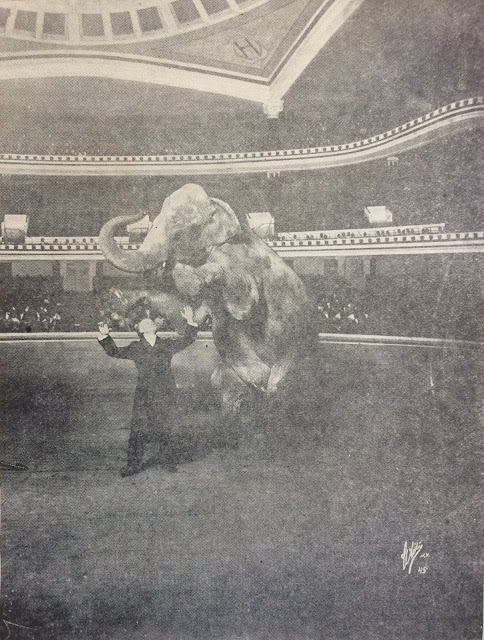 Now look at the image below. This is actually the familiar photo we see in books, etc., and it's pretty clear that it's not the same image as the above. Houdini is in a very different position. However, Jennie is in the exact same pose, although she's in a different position in relation to the background. That means she's one well trained elephant, or this famous shot is not what it seems. 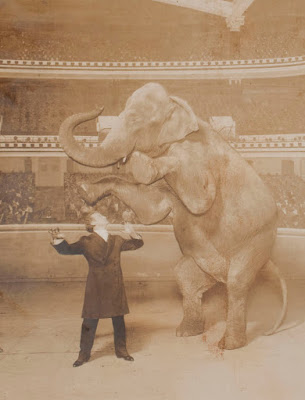 I've always looked this photo with some skepticism. Not only does it seem like an improbable moment to capture on camera, but the light on Houdini, Jennie, and the cavernous Hippodrome does not seem achievable. The Hippodrome appears to be a backdrop. But is Jennie herself artificial? That is not as clear to me, but these two photos seem to suggest that she is.

This photo is credited to the famous White Studio, and was likely taken in the studio itself. In the un-cropped version one can see a person standing just off the edge of frame. The audience directly behind Jennie's right foot also appears to be painted, possibly onto the negative itself. So what's going on here? Break out the magnifiers! 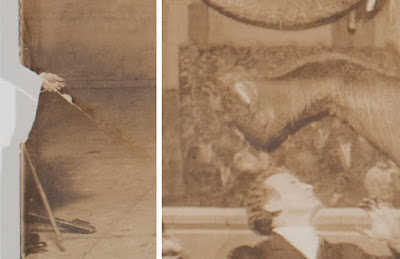 No matter how the photo was created, it's still a great shot, and it's exciting to see an alternate version (which has been hiding in plain sight). These two images remain the only known photos of Houdini's vanishing elephant illusion.

Thanks to Perry from New Jersey for bringing this photo to my attention.

UPDATE: Reader David Tank has created in the below animated gif which appears to show that the elephant did move. Interesting. Thank you, David!