Did Houdini revive the vanishing elephant in 1925?

Our good friend David Charvet sends over an intriguing newspaper clipping from the Buffalo Evening News, October 21, 1925, about Houdini's engagement at the Shubert-Teck Theater in Buffalo, NY. This was during Houdini's first tour with his 3 Shows In One and the article covers familiar territory, until this remarkable paragraph:

One of the biggest mysteries of "vanishing" which Houdini offers in his performance at the Shubert-Teck is the disappearance of a mammoth elephant from the stage. Another is his East Indian Needle trick.


The vanishing elephant!? This is the first time I've ever heard of Houdini performing this outside of New York City and beyond the years 1918 and 1922. It's also the first I've heard of it being associated with his full evening show. It seems remarkable that Houdini would be able to take something this large on the road. But the Shubert-Teck was an unsually large venue which could accommodate the illusion. So did Houdini really perform the vanishing elephant here in 1925? 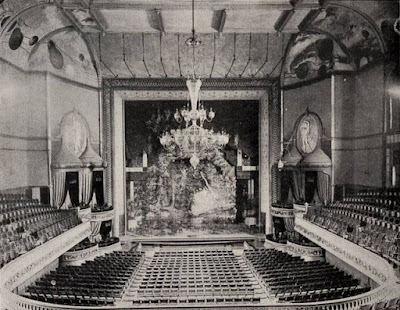 According to Koval (The Houdini Research Diary, Part 6: 1921 to 1926], Houdini performed at the Shubert-Teck on October 19-24. During this week Houdini gave a special performance for the city newsboys. He also performed at the School for Crippled Children on East Ferry Street.

The Shubert-Teck was converted to a movie theater in 1945 and became a Cinerama theater in the 1950s. It was abandoned in the 1960s and finally demolished in the late 1980s. You can read about the theater history HERE.

UPDATE: Gary Hunt (Magic Footnotes) has uncovered a review of the free performance Houdini gave for the newsboys on October 24. The article spells out in detail many of the magic effects Houdini performed, and there is no mention of the vanishing elephant. (The article also includes a terrific photo of Houdini with the newsboys which I will feature in an upcoming post.)