Did Houdini try to buy the Oakland Oaks? 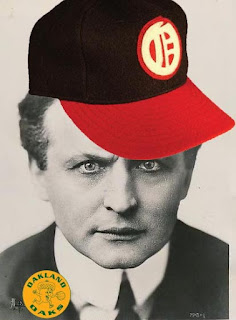 Here's one for the start of baseball season today. In doing research for his new Houdini book, Joe Posnanski, executive columnist for MLB.com, uncovered this curious newspaper clipping that says Houdini was interested in purchasing the Oakland Oaks, then part of the Pacific Coast Baseball League, in 1919. 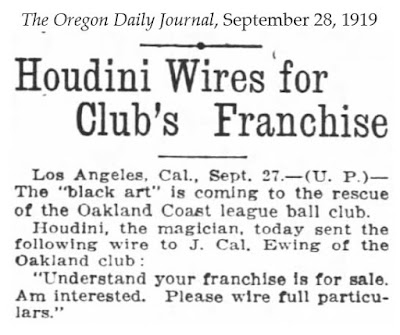 Houdini was interested in sports and did on occasion manage athletes, notably wrestlers. But his interest seemed largely confined to individual sports such as track, boxing and racing. Team sports did not seem to interest him as much. Houdini was also investing heavily in motion pictures at this time, so it seems odd for him to be branching out into the business of sports.

The article below from the September 28, 1919 Los Angeles Times, also uncovered by Joe, puts Houdini's inquiry into better perspective.


So it seems that expressing interest in buying a sports team -- serious or not -- was a popular way of generating publicity among the Hollywood set at this time. Houdini was indeed in Hollywood in 1919 making The Grim Game and Terror Island and he was assigned a studio press agent. So maybe this was all the press agent's doing?