Houdini, Penn's mom, and a "nut" in England 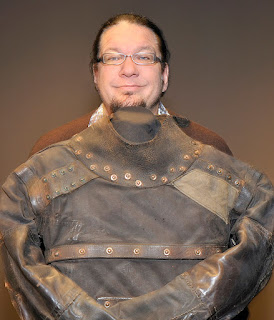 In a recent episode of the podcast Penn's Sunday School, magician Penn Jillette told a story about how his mother one day mentioned that she saw Houdini when she was 9 years old. At this point Penn had been involved in magic for some 30 years, so he was a little surprised that his mother had never thought to mention this before! So he decided to "be a smart ass and fact check my mom."

Penn contacted Ken Silverman, author of Houdini!!! The Career of Ehrich Weiss--which Penn called "a serious Houdini biography" (and I certainly agree)--to see if Houdini ever performed in Turner Falls, Massachusetts as his mother claimed. Silverman referred him to someone whom Penn affectionately described as a "nut in England" who was attempting to document every day of Houdini's life. Penn does not reveal the name of this "nut," but I suspect it was the late Frank Koval, who in 1993-94 produced the phenomenal six volume The Illustrated Houdini Research Diary (which I use constantly and, being a "nut" myself, have been updating for years).

The upshot of the story is that Koval (if he was the "nut") was able to confirm that Houdini did indeed perform in Turner Falls around the time Penn's mother was 9 years old. As far as Penn's mother not telling him, co-host Michael Goudeau quipped, "This raises the question. Who does you mother truly not give a shit about; Houdini or you?"

Of course, Penn tells the story much better and much funnier that I just did here, so I'd recommend giving episode 282, "First Liar Doesn't Stand A Chance," a listen.

Below are all six volumes of Frank Koval's The Illustrated Houdini Research Diary. 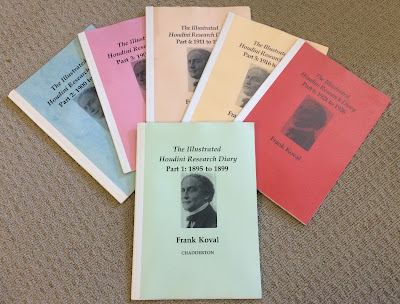