A diary from 1911 that belonged to an Alice M. Ellison of Boston sold this week on eBay for $11.50. What makes this interesting to us is that on September 29th Alice noted that she "saw Houdini" at Keith's Theater in Boston. 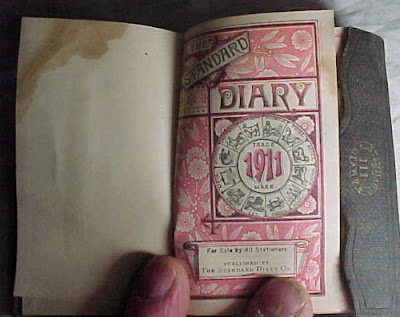 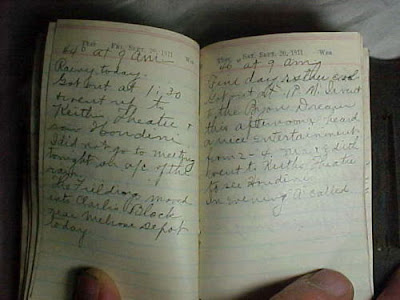 As you can see from the auction photo above, it's just a one line reference, but it's still exciting. The person who wrote those words had in her head a fresh first-hand memory of Houdini. It's also worth pointing out that was an historic week for Houdini in Boston. It was during this same engagement that he accepted the famous "sea monster" challenge on September 26.

According to Houdini His Life Story [page 229], on the day Alice saw Houdini he accepted a wet sheets challenge. "He permitted hospital attendants to bind him on a cot with sheets and bandages until he looked like a mummy, and then pour a dozen buckets of water over the cloths."

Alice also records that it was raining that day. Between the rain, sea monster and wet sheets, this was one soggy week for Houdini.