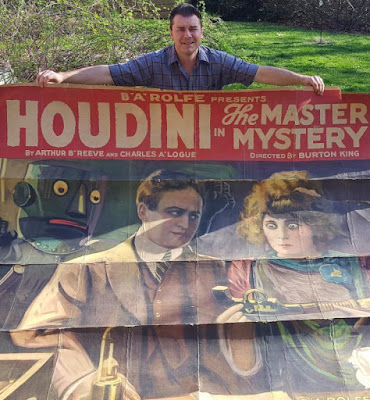 David Haversat has recently located an unknown image of Houdini's Master Mystery! The lithograph is also special as it's the only six-sheet lithograph of the Master Mystery series known to be in existence.

The Mastery Mystery was produced in [1918] with Harry Houdini starring in all 15 episodes.

The pressbook for the series boasts an extensive list of Otis lithographs; one, three, six and twenty-four sheet posters. The image discovered by Haversat is labeled as Episode 14, yet it's totally different art from the one-sheet lithograph from the same episode. In fact the image depicted on this six-sheet is actually a scene from Episode 15, the final production of the series.

This poster was the only magic related item among a number of antiquities including other silent film posters found in Canada. The poster's survival may be due to the fact someone had taken the time to mount the lithograph many decades ago. It will now be scheduled for modern day conservation. 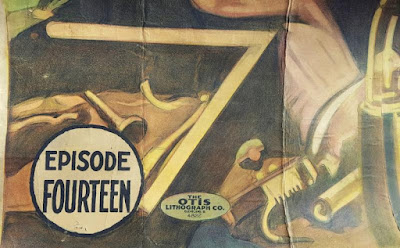 In 2013 David uncovered a rare German one-sheet for Houdini's Water Torture Cell. In 2015 he uncovered an "American's Sensation" poster in California.

Congrats to David on another amazing find!

Email ThisBlogThis!Share to TwitterShare to FacebookShare to Pinterest
Tags: Posters, The Master Mystery (1918)