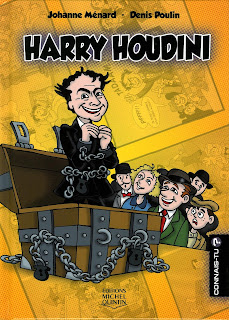 Harry Houdini - Nº 17 is a 64-page French Canadian Houdini biography/comic by Johanne Ménard and Denis Poulin. It was first released in 2014 as Connais-tu Harry Houdini (Do You Know Harry Houdini?).

This refreshed edition from publisher Michel Quintin was released on February 27 of this year. It can be purchased at the Canadian Amazon.ca.