I'm always excited to run across evidence of a specific Houdini radio broadcast because I continue to hold out hope that one day a recording of one of these will surface. And wouldn't it be nice if it was this one?

On Wednesday, July 22, 1925, Houdini engaged in a panel discussion and debate on station WOR. Below The Brooklyn Daily Eagle spells out the particulars. 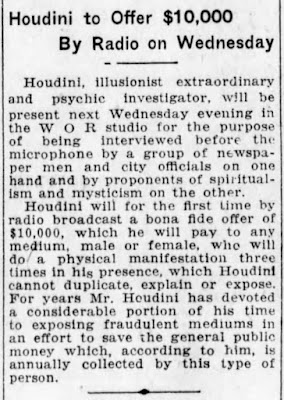 While broadcast from New Jersey, in 1924 WOR established a studio in Manhattan specifically so stars based in New York would have better access to the station. It's likely this was the studio Houdini visited on this day. As you can see from schedule itself, "Houdini, interviewed by scholars" was broadcast at 10:05 PM and lasted 30 minutes.


WOR is still around today (home to the Mets and the likes of Sean Hannity and Rush Limbaugh). I'm not sure if they made recordings back in 1925; but if they did, you'd think the Houdini broadcast would have been something to save. Any WOR radio archivists out there what to find this recording and make history?

Below are links to more Houdini radio activity, including a transcript from my own collection of a radio address he gave on WTIC in Hartford, CT on December 3, 1925. 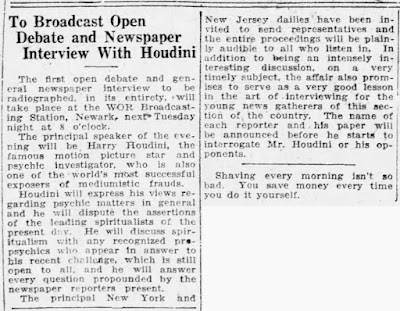