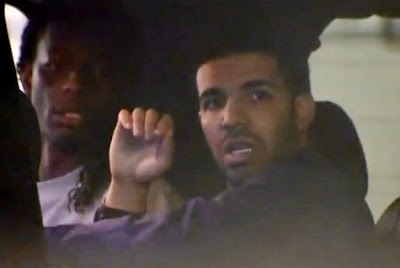 A story in the National Enquirer says that rapper Drake was "scared away" from the fabled Houdini Esate in Laural Canyon while shooting a promotional video. Under the headline, "Drake Hits The Brakes At Haunted Houdini House!" the tabloid reports:

Famed for his trademark cool-as-a-cucumber persona, Canadian-born crooner Drake suddenly turned terrified/chilled to the bone, even though it was hot as hell in L.A., while shooting a hush-hush TV promo at the allegedly haunted estate of legendary magician Harry Houdini!

Totally terrified, twitching at every creepy creak or chilly draft on his cheek, distraught Drizzy, saying he felt like he was burning in the ‘hotline to hell,’ finally performed his own magic, abruptly disappearing down the path back to his car at a, er… dead run.


However, the website Gossip Cop doubts the story, citing the "suspicious language" of the tipster. But as I can't seem to find the original story at National Enquirer, I'm wondering if Gossip Cop invented the story just so they could debunk it. Fake news creating fake news to debunk it as fake news? My head hurts.

Of course, the house in Laurel Canyon only has a tenuous connection to Houdini, as I covered in this 2012 post. But it has drawn many celebrities and rock stars over the years. Although most have managed it better than scaredy cat Drake!