LINK: Houdini His Legend and His Magic Book

For the rest of this week our friend Neil McNally at The Doug Henning Project is highlighting the book Houdini His Legend and His Magic by Doug Henning and Charles Reynolds. Released in 1977, this was one of the "fantastic four" coffee table books released within year of one another. Check out the original advert for the book below: "Houdini and Henning make your gift problems disappear like magic!" 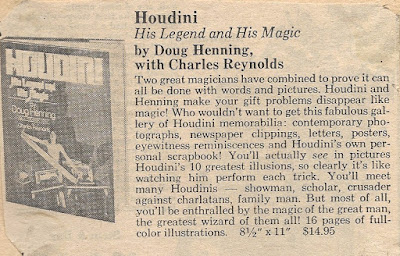 Click the headline to view the first installment at The Doug Henning Project.