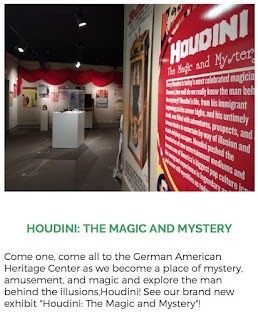 A special Houdini exhibit is currently on show at the German American Heritage Center in Davenport, Iowa. "Houdini: The Magic and Mystery" opened May 28 and runs through November 4.

The exhibit was compiled by assistant director Kyle Dickson and intern Michael McMahon.

"His influences comprised mostly German sources; his immigrant story is a great one," says Dickson. "There's so  many cool stories people don't know. He was a modern man stuck in a pre-modern world."

The exhibit includes historic photos, advertisements, shackles from the Sidney Radner collection, video footage of Houdini's escapes, a recording of the Final Houdini Seance, and a straitjacket that visitors can put on, borrowed from Augustana College's theater department.

On September 23, Duffy Hudson will appear at the museum with his acclaimed Houdini one man show.