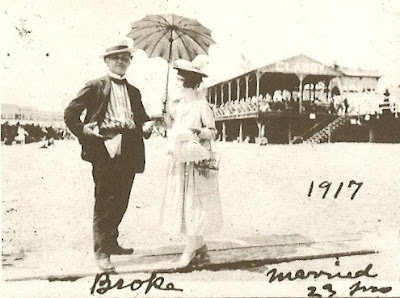 Today is the 123rd wedding anniversary of Harry and Bess Houdini. The couple married on June 22, 1894 in Coney Island where they were both working as sideshow performers. It's said they later had two more ceremonies to satisfy their families -- one with a rabbi and the other with a Catholic priest. "I'm the most married woman I know," Bess would quip.

If they were in town on their anniversary they would always spend it in Coney Island and take a playful anniversary photo (above is their 1917 pic). Their song -- said to have been the song Bessie was signing when Harry first saw her on stage -- was Rosabel...

(I know what you are all thinking: "Forget this mushy stuff, bring on the 278 pics!" Know that I'm working on it and hope to have the first post up this weekend.)
Written by John Cox at 12:40 PM