An early handwritten Houdini letter from 1897 sold for a whopping $18,720 (including 17% premium) at Haversat & Ewing's Winter Magic Auction this weekend. This shattered the $4,750-5,000 reserve price. The letter is written on early stationary promoting "The Houdinis" and their signature trick, Metamorphosis. 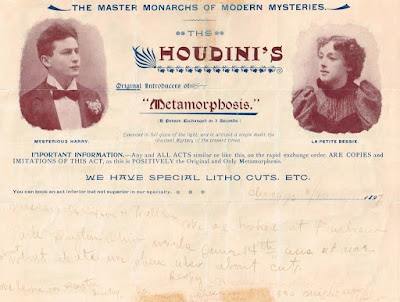 The Houdini's Metamorphosis Stationary. Handwritten and signed by Houdini June 10, 1897. Content includes Houdini and Bessie performing at Fairview Amusement Park in Dayton, Ohio on June 14, 1897. Reverse contains a full page of vignettes of The Houdini's Metamorphosis! Only other known example is in the Library of Congress, but trimmed and without handwriting of Houdini. This may be the only known example with handwritten correspondence directly from Houdini. $4,750-5,000.


As high as this price is, it's actually not the highest I can recall for a Houdini-related letter. In 2011, a letter from Harry Kellar to Houdini congratulating him on his vanishing elephant sold for $32,500.