Houdini exposed mediums MUCH earlier than we thought

While working on my New Houdini Chronology, I discovered a remarkable clipping in The St. Joseph Herald dated Jan. 16, 1897. While we knew Harry and Bess did a spiritualist act early in their careers, here is evidence that Houdini did public exposures of fraudulent mediums at this time as well. Houdini exposing mediums is a practice that's typically associated with him in the 1920s, so this is a bit of game changer. 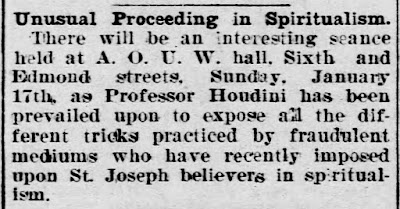 Interestingly, Harry and Bess would do their own "Spiritualistic Seance in open light" just 10 days later at another A.O.U.W. Lodge in St. Louis.

Of course, you will still see Houdini's involvement with Spiritualism dated to his mother's death in 1913, but this is really one of the more ingrained Houdini myths. While Houdini certainly wanted to speak with his mother if possible, his interest and involvement in Spiritualism dates back to the start of his interest in magic itself. And now we see so did his ghost-busting.

UPDATE: Patrick Culliton's The Tao of Houdini (1997) contains Houdini's very own description of this first exercise in exposing frauds:

In St. Joe I found a medium named Hatfield Pettibone, who was "living easy" by means of spirit letters, automatic writing and the like. He had managed to rope in the landlady with whom I was stopping, and failing to convince her that she had been defrauded, I sent word to him that if he did not refund the money I would expose his graft. He returned a haughty reply to the effect that I, being a performer engaged at a dime museum, was the fakir, not he.

In order to make good my word I secured the A.O.U.W. hall in St. Joe, and advertised that I would expose false mediums. That night opned to me a new page in mediumistic methods: that perfectly honest persons would fight to protect a medium against the exposure of his crooked trickery and something that I had not counted on, and this came very near defeating me.

Pettibone's friends were present in goodly numbers, and made a concerted attempt to break up the show, but happily they only succeeded in booming the performance and swelling the gate receipts, which did not so much matter at that time, as ice cream sodas were not then 22 cents each.

The performance took place in a continuous uproar, but nothing more violent than a floods of words developed, and as:–

"Sticks and stones may break your bones, but names will never hurt you."

My performance closed in profitable safety.