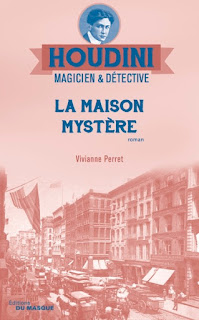 This time the adventure is set in New York in 1904 and takes place largely inside Houdini's newly purchased home at 278 West 113th Street. Vivianne had always planned book 4 to be set inside 278, and it was just a happy coincidence that the house opened up last year while she was writing.

Vivianne's second book, Le Kaiser et le roi des menottes (The Kaiser and the King of Handcuffs), will be released tomorrow in a mass market paperback edition. This time the publisher decided to go with new cover art for the paperback, as can be seen below. Curious art in that it isn't even and illustration of Houdini. Robert-Houdin perhaps?

You can purchase all the "Houdini Magicien & Détective" books from Amazon.fr, Amazon.co.uk, and Amazon.com.

No word yet on Book 5 or English language editions, but fingers crossed that we will see both.