Houdini returns to Catalina Island in 2018 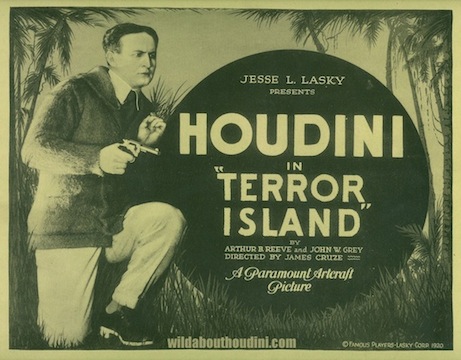 In November 1919 Houdini filmed part of Terror Island on Catalina Island off the coast of Southern California. Now Houdini will return in a special exhibition at the Catalina Island Museum called Houdini: Terror on the Magic Isle. The exhibition runs May 5 to Oct. 7, 2018 and will feature many rarities never before put on display.

Escape artist Harry Houdini delved into the magic of moviemaking toward the end of his career. This unique exhibition focuses on the 1920 adventure film Terror Island in which he starred. Ephemera and movie props from the film made on Catalina Island, nicknamed The Magic Isle, will be on display. The exhibition highlights a real-life occurrence in Catalina's waters that placed Houdini in a precarious situation that ended in mystery.


The museum will also host a special screening of Terror Island in Catalina's spectacular Art Deco Avalon Casino Theater on Saturday, May 19th at 1:00 PM. The screening will include live musical accompaniment by Michael Mortilla and The Accompanists. Tickets are available now.

I'm proud to say I've been working with the museum on gathering artifacts and information for this exhibition. In fact, next weekend I'll be heading over to Catalina with fellow Houdini nuts Joe Notaro (HHCE) and Mark Willoughby to scout out any surviving Terror Island locations along with the museum staff. Whatever we find will also be part of the exhibition. So get ready for a lot of Terror Island talk in the coming months!

Check out the Catalina Museum website for more details, and maybe start planning a vacation in Catalina Island for 2018. Even without a Houdini exhibit it's a terrific destination. Look who else thought so!


The Terror Island lobby card above comes from the Mark Willoughby Collection and will be among the many original lobby cards on display at Houdini: Terror on the Magic Isle.