John Bushey has passed away

I have some extremely sad news. John Bushey, a great friend and a major collector of handcuffs and Houdiniana, passed away on Thursday after battling cancer for several years. The blog Ennyman's Territory announced his passing today with a heartfelt tribute. Friends are leaving messages of condolences and remembrance on John's Facebook page and at Handcuffs.org. 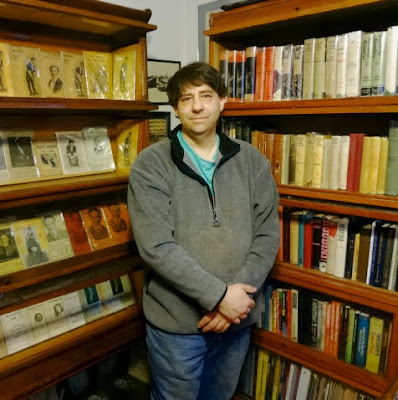 Among John's many contributions to the Houdini world was his taking on the task of collecting and documenting every edition and variation of Houdini's pitchbooks. He was an unsurpassed expert in this area, and I always enjoyed receiving his excited phone calls sharing the news that he had just uncovered yet another variant of Adventurous Life of Versatile Artist, etc. John shared many of his rare finds in a continually updating treatise called The John Bushey Houdini Collection.

John was also a huge Bob Dylan fan and one of the forces behind the Duluth Dylan Fest in his home state of Minnesota. John had a regular show on radio station KUMD called Highway 61 Revisited. The studio has now been renamed the "John Bushey Highway 61 Revisited Studio."

A giant among the Houdini collectors and a good friend to us all, I was very lucky to have known him and I will miss him very much. Say "hi" to Harry for us John!