Houdini's office inside 278 is finally FOUND! 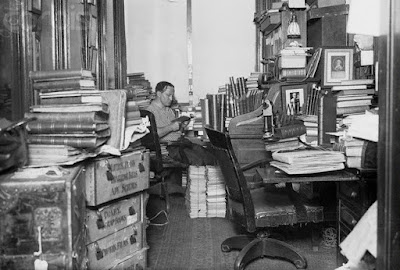 Where exactly was Houdini's delightfully cluttered office inside 278, as seen in the famous photo above? Unfortunately, my visit the house last June did not really answer that question. There are several descriptions of Houdini's office being on the 4th floor, and I took this photo expecting to find a perfect match. But I did not. The third floor alcove offered a better possibility, and at the time I went away thinking that was most likely the location of the office. But I never felt great about it. Recently, I've been working on the idea that it was actually located on the stairway landing of the third floor, and there are aspects that help support this theory (including a perfect window match). But now the mystery has been solved, and the solution has been right inside this photo the entire time!

When I was talking to David Copperfield last week about Houdini's library bookcase (which he now owns), he mentioned the "other picture" of the bookcase. Wait. Other picture? He then sent me the familiar "office" photo, and my jaw hit the floor. How did I never notice that the library bookcase is right behind Houdini in this pic!? 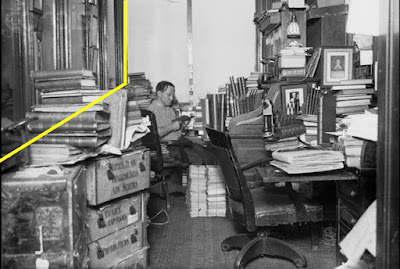 You can see the bookcase even better in this image from the McCord Museum. Unmistakable. 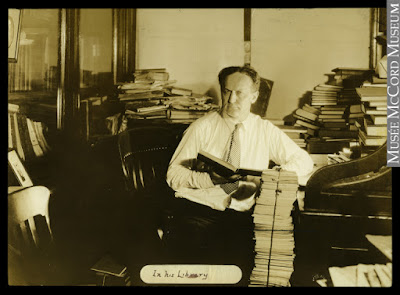 But there was still a problem. The Parlor Level library (today the master bedroom) is a large open room, just as it was in Houdini's day. This appears to be a much smaller room. So what gives? Is it possible the bookcases were originally on the upper floors? If so, my third story landing theory might still have a chance.

That's when I received an email from Alec Mathieson. Alec is the bright young man who discovered the missing moulding at the top of the surviving bookcase, which provided proof positive ID (the discovery of the open house, IMO). Coincidently, Alec had just made the same discovery about this being Houdini's library, but he came to it from a different source than the bookcase and he once again nailed it! I'm going to let Alec's email speak for itself:

The theory I've come up with is that this famous "office" photo is actually a photo of Houdini in his library, and not in a room on the 4th floor. I'll lay out the clues that brought me to that conclusion, which, I know, sounds bonkers, but bear with me.

I found the first clue in this photo: 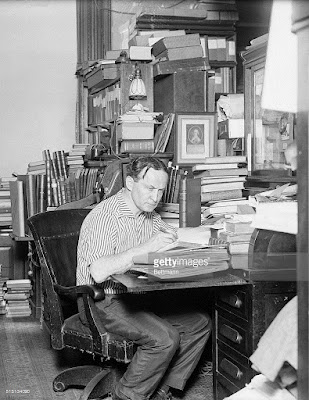 At the back of the room, there is clearly a wood-paneled wall, which doesn't match the panelling in the enclosed balcony on the 4th floor, which is something that I imagine threw you off too at the open house. I unfortunately don't have any clear photos of the wood panelling in the library/master bedroom, but I recall seeing it on the tour. It would be behind the bed in this picture, continuing below the windows. 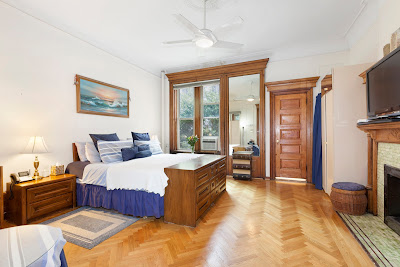 So in following this thread, and even I thought it was crazy, I tried to match up the features of the back window with the photos, and that's what convinced me. We've been assuming all along that the "office" is a narrow, cramped room, because that's what the photo suggests. I assumed that the desks and piles and shelves are backed up against a wall, but if my theory is correct, they would have created a sort of partition down the middle of this room in between the bookcases against the wall on the left, and the door to the back bathroom. Here's what confirmed it for me. If the office photos were in fact taken in the library, then there would have to be a mirror on the wall to the right of the two windows, and here it is: 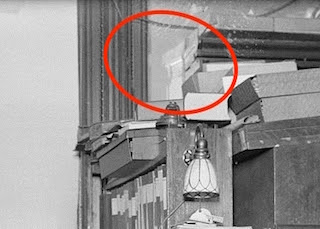 In the above photo, it looks clear to me that the books at the top of the pile are reflected in the mirror they are sitting against. As far as I know, this is the only place in the house where a window and mirror are next to each other in this configuration.

I imagine the photo of Houdini with the trumpet, and other photos of that angle could be another room on the upper floors, and maybe that was a separate office space he used, but it seems to me that the photos of Houdini at his desk must have been taken in the library. Maybe his office was moved at some point, or he just let the clutter get out of hand, because clearly the "office" photos are unrecognizable from what I thought was the only photo of his library (Houdini leaning on the bookcase).

Again, maybe you already knew all this, but it's new to me and totally changes the layout of the house in my head in an awesome way. Let me know if anything wasn't clear or if you have any questions. I'd love to hear your thoughts on this!


My answer to Alec was simple: You got it!!!

Another thing I love about this discovery is that it fits with Houdini's comment about working at his desk and hearing Mrs. Houdini call up from the kitchen, "Young man, your lunch is ready." This is one of the things that I had to reconcile with the other candidates, and it never worked. Houdini could never hear Bess from the kitchen in those spaces. But here with the door open (or maybe there was no wall in Houdini's day) to the entryway and the stairway leading down to the 1st floor kitchen, it works perfectly!

Unfortunately, I did not do a great job of photographing this room when I was inside 278. But here are the photos I did take of what we now know is the location of Houdini's famous cluttered desk. I've also amended my floor plan to show the new room configuration. 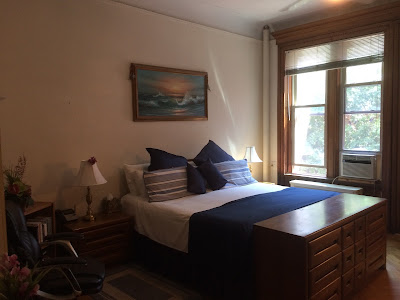 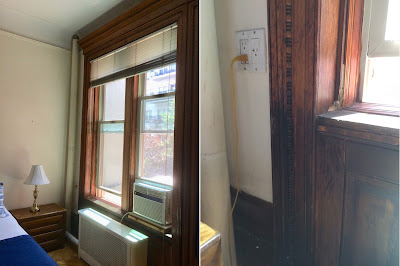 Now as to the idea of the 4th floor office in the alcove off the front workroom, I believe that to still be valid. Houdini could have had a second office space upstairs, or he could have moved his library office up to the 4th floor when the open balcony was enclosed, which I think happened sometime in the 1920s. That could explain why there is no more clutter in the photo of Houdini standing by his bookcase, which is clearly a photo of Houdini later in life. By this time, the mess had been moved upstairs! Thanks to Alec and, of course, DC for helping crack yet another Houdini mystery.