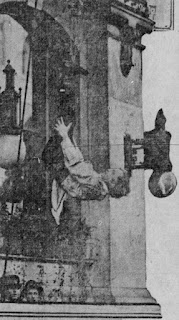 Our friend Joe Notaro has a nice post today about Houdini's second (as far as we know) suspended straitjacket escape from the Tribune building on 4th street in Minneapolis. The escape took place on September 30--not the 29th as previously thought--with Houdini being raised 45 feet from the ground.

On a recent visit to the McCord Museum in Montreal, Joe uncovered some newspaper clippings about the escape. He also uncovered a few new images of Houdini's 1915 Los Angeles suspended straitjacket escape.

It's all at Joe's, so click the headline and have a read before Houdini slips free!