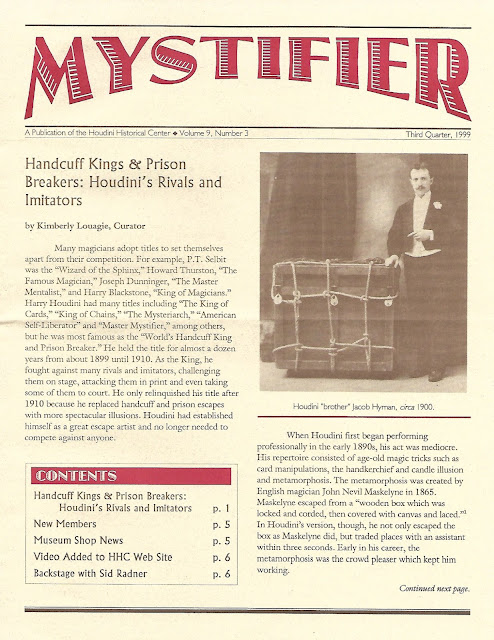 The Third Quarter 1999 Mystifier is once again made up largely of a single article by curator Kimberly Louagie on "Houdini's Rivals and Imitators." Once again it's aimed at a more general reader, but there are a few gems for the hardcore. These include a notation on a 1903 photo in which Houdini acknowledges S.S. Baldwin as "the man that gave me the handcuff idea." There's also Houdini's amusing but cheap shot at Brindamour that appeared in his Conjures Monthly Magazine:

He wrote that when he met Brindamour in 1896 he was a dance teacher. He "showed me pictures of himself in ballet costume, and seemed to be proud that he could impersonate the female sex so perfectly." Also included was Brindamour's business card with the words, "Teacher of Fancy Dancing."


The article includes a terrific photo of Jacob Hyman and his sub trunk and an unpublished shot of Hardeen on stage entering a packing case circa 1930.

The newsletter continues with the announcement of a new postcard featuring Houdini's famous Circus Busch poster. It references it as being 1908, but the image is actually the 1912 version. It's also noted that HHC attendance is up 9% for the year, and that QuickTime videos of Sid Radner have been added to the HHC website.

"Backstage with Sid Radner" features a group photo of HHC Honorary Board members at a recent dinner. Sid also notes that Tom Boldt's son, Philip, is training to do Houdini's Water Torture Cell. "An interest in Houdini may be hereditary." Sid then gives a nod to a new book, The Great Houdini by Monica Kulling. He also gives details of the upcoming Official Houdini Seance in London. He then ends with this:

An interesting potential bit of news; there may be another Houdini relative. It appears that a previously unknown family member emigrated to the United States. I am trying to pursue this matter, and will keep you informed.


I'm not sure who Sid is talking about here, and I don't recall if he ever did reveal more in an upcoming newsletter. But I guess we will find out as we continue on!