Houdini and his "sister" 112 years ago today

Let's kick off the month with a terrific illustration that appeared 112 years ago in the September 1, 1907 San Francisco Examiner. This accompanied a humorous playlet called "The King of The Cuffs or What's In A Name?" In it, the Houdinis have a group of fellow vaudevillians over for tea. But what's interesting is Bess is portrayed as being Houdini's sister, not his wife. 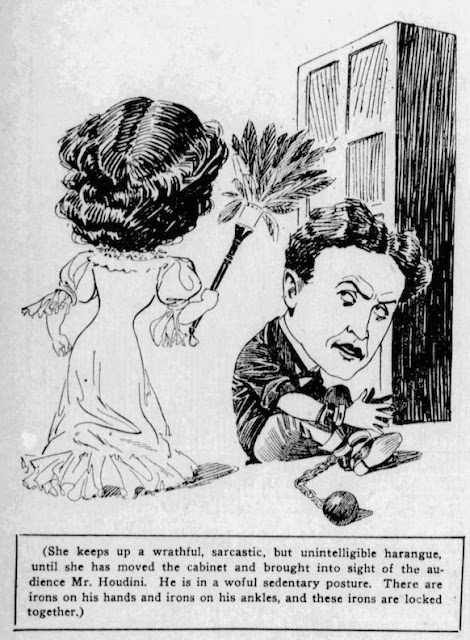 The idea of Bess playing Houdini's sister is not as odd as one might think. I have found numerous references from the 1890s right up through 1925 that Harry and Bess often presented themselves as brother and sister onstage.

I've been contemplating a post on this brother-sister revelation, but I'm still gathering info and trying to get my head around it. But it appears Harry and Bess might have played characters onstage more than has ever been understood.

Below is the full playlet as it appeared in the Examiner. If you click it and save to your desktop, it should open large enough to read. Enjoy.


UPDATE: Recently I found an article in the March 15, 1908 Pittsburgh Daily Post that openly discusses what it calls the Houdinis "my sister" subterfuge: 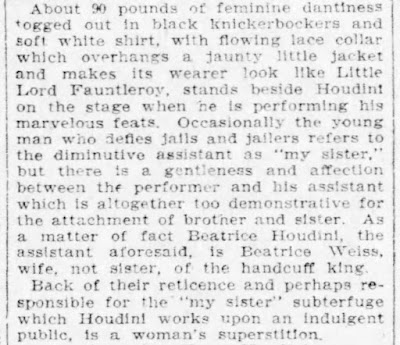 The article goes on to tell the same basic story shared in this post about how Bess believed husband and wife acts don't succeed and how they should no longer perform as such. It goes on say that success came soon after that decision, and Bess, who "is superstitious to a degree that is abnormal even among people of the stage," felt she should never appear onstage as Mrs. Houdini.